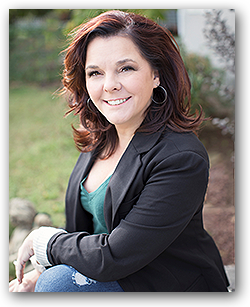 I must admit, I have lived an extraordinary life and will forever be grateful for the opportunities I have had.

I was the middle of three kids, my older brother being deaf for as far back as I can remember. At the time, I didn't realize how much that would later impact my life. I was a sign language interpreter for a short time (although I'm extremely rusty now) and taught my kids signs when they were little. Growing up with a hearing impaired brother planted a seed of compassion in me for those with handicaps.

During college I was living in southern California working for Disneyland as a Cast Member in the Entertainment Department. I met my husband there who was also a performer. After four incredible years working with the Mouse, we moved to his hometown in the Bay Area and married.

I eventually got my Bachelor's in Kinesiology and worked in the fitness industry for ten years before a knee injury ended my career. Not sure what to do with my time, I applied to job posting to be an online journalist. I loved writing, but had no experience. I didn't hear back so I wrote up a review about a local restaurant and sent it to them to prove I could do the job. Twenty-four hours later, I was a journalist with AOL Media/Pleasanton Patch.

I spent three great years with them before cut backs forced me without a job again. That's when I started writing my first novel, which went nowhere. Dozens of rejection letters later. I started a second book. A year later I was offered representation by Thao Le from Sandra Dijkstra Literary Agency and within another six months I was offered a book deal. Everland (Scholastic) debuted in the Summer of 2016!

Today I live in the Bay Area with three sons who are my biggest fans. While they're off at work and school, I bounce ideas off my four-legged, furry family members, Odie and Alex.

Is Wendy really your name or just a pen name you decided to use since you were writing a Peter Pan retelling?
Yes! My real name is Wendy.

You were a Disneyland actress? What exactly did you do?
I have forever sworn secrecy to the Mouse. However, I can tell you I've signed autograph books before, but never with my own name.

How did you come up with story of EVERLAND?
I once heard someone say write what you know, write what you love, write what you're passionate about. I've always been an avid reader and have loved the classic fairy tales. Working for Disneyland only fueled my love stories. It occurred to me one day that many of the stories (both the classics and Disney versions) had slight steampunk elements in them and I thought: What if I put Peter Pan in a total steampunk world?

Who is your favorite character in EVERLAND?
I love them all, but Gabs is my absolute favorite. While writing Everland I wanted to bring through the elements of childhood and innocence in the midst of this destroyed world where kids were forced to grow up. My youngest son is on the autism spectrum. He talks a lot! And often time one sentence has nothing to do with next, but somehow he will always circle around to his initial thought. He was my inspiration for Gabs.

Do you have any advice for aspiring writers?
YES! Stop calling yourself an "aspiring writer." You write thus you're a writer. If you've written a story, you're an author. Own the title. Find yourself a few critique partners to swap manuscripts. An awesome critique partner will be brutally honest with you and tell you when something isn't working.

Did you always want to be a writer when you were growing up?
Much like the classic Peter Pan, I refuse to grow up. Being a writer is one of many things I've wanted to do, but one of the few things that was attainable (although the writing industry is tough to break into). I also wanted to be a queen, a rock star, an Olympic ice skater, a spy for the CIA, a fairy, and Lara Croft. Obviously, I have yet to achieve my other dreams in real life, but in writing stories anything is possible.